Scam news was being circulated saying that 16 members of Japanese whaling crew have been killed by killer whale. The report claiming such an incident in world news website appeared to be fictitious. In the crew report claimed stating that after an on-board panic caused by a gas leak on the MV Nisshin Maru, a number of crew members jumped overboard where they were seriously attacked by the killer whales. 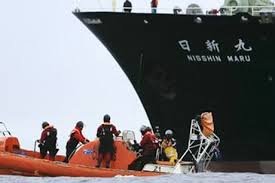 Japan is being reflected in the history of whaling wherein it is being criticized worldly. The news reported in Satire World News Daily Report website. The news depicts an Australian customs boat beside the Japanese whaling ship Nisshin Maru in January 2008.

Before believing through any facts and fictions that comes via social media or emails it’s better to check through various news sources. In recent months the site was responsible for circulating stories which had to be false and fake. Many readers believed that the stories mentioned in this news site were true to their knowledge.